Eugene Debs and the American Movement 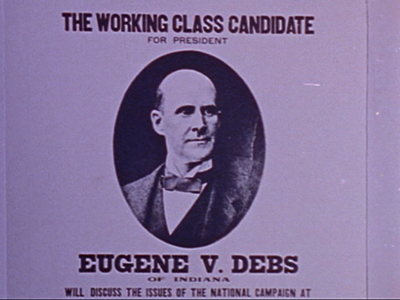 Eugene Debs & the American Movement is an educational video that documents fifty years of long-suppressed history. Using extensively researched photographs, drawings and newsreel footage, it tells a story of the bloody strikes and brutal government reaction to the American workers' attempts to organize.

This film is movingly narrated in Deb's own words, read from his speeches and writings, by his friend and comrade, Shubert Sebree.

From after the Civil War until his death in 1926, Debs was part of U.S. history at a time when the foundations of modern industrial and corporate nation were established. In this fifty year period, Debs was influenced by events as diverse as the massive railroad strike of 1877, the rapid growth of monopolies in the 1890s, World War I, and the Russian Revolution. This film presents a unique picture of the historical conditions as well as a portrait of a man who:

Debs and the movement he helped build are more than just nostalgia, they are roots of a long and bloody struggle of American working people to own collectively what they produce.

What they say about "Eugene Debs and the American Movement"

"It's quite a challenge to piece together an audiovisual presentation of a period that preceded the audiovisual age ...happily this film does so in a manner that is both emotional and educational."
Labor Studies Journal

Price: $100 (+ $10 handling and shipping.)
The price includes public performance rights ( you can show it to a class or at a public event.)
Go to the order page.