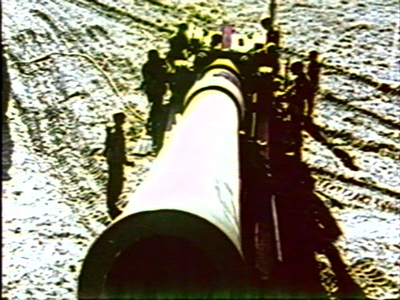 This is a 30 minute film produced by Cambridge Documentary Films with assistance of the American Friends Service Committee, New England region & the Boston Mobilization for Survival.
"The Last Empire" (1986) documents a hidden history of nuclear threats, violent interventionism and near-suicidal arrogance that routinely brought the world to the brink of annihilation.

"The Last Empire" still serves not only as a fascinating historical eye-opener, but also as a warning against intervention in the Third World in the future.

"The Last Empire" is about the relationship between U.S. intervention in the Third World and the increasing danger of nuclear war arising from these military adventures and foreign policy strategies.

It presents the view of progressive historians and nuclear theorists, and combines their words with compelling evidence that demonstrates the historic willingness of the U.S. to back up military threats and interventions in foreign countries with nuclear weapons and war strategy.

What they say about "The Last Empire"

"'The Last Empire' is a history lesson that the U.S. has never learned. Slowly and carefully, Lazarus and Wunderlich build an indictment of the U.S. tradition of aggressive foreign policy, dating back to the beginnings of the republic. The analysis is delivered by soft-spoken expert observers with impeccable credentials - Howard Zinn, Noam Chomsky, retired Admiral Gene LaRocque, et al. - but their message is explosive."
Global Village Film Festival

Price: $140 (+ $10 handling and shipping.)
The price includes public performance rights ( you can show it to a class or at a public event.)
Go to the order page.